E28 - A story of friendship

Today we are going to talk with Gabriele - she is the ex-owner of this E28, more known as "Shark". 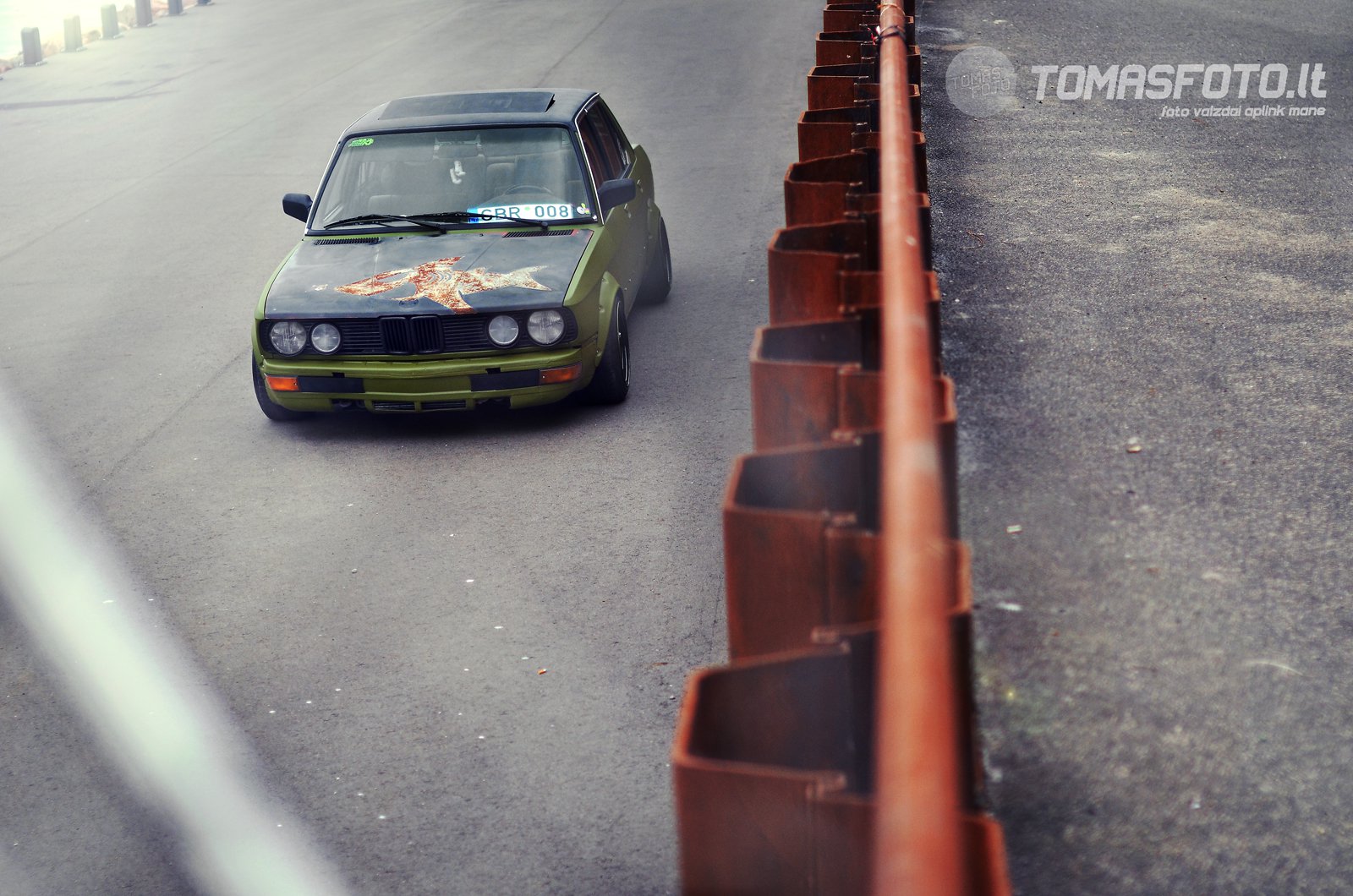 So how did the Shark end-up in your garage? The appearance of shark was actually unplanned. I have never searched for a Diesel car, nor did I search for a BMW, I just didn't like them. But you know how it goes, the things you don't like the most are the things you will end up with. So I needed a new car because my old one was sold two months ago, and I bought this E28 from a friends friend without even seeing it. And when I got it - I understood that it was a beater. The suspension was shot, the interior was garbage, it ran like crap. But I knew there was no going back so I decided to just fix the most needed things. I simply wanted it to get me from point A to point B. That's where the project has gone out of hands. 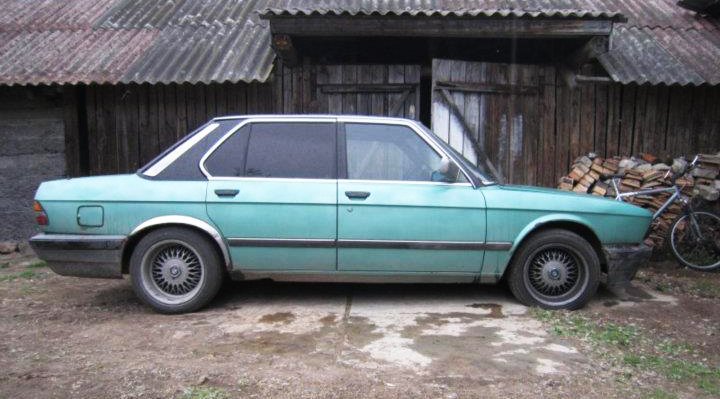 Usually, girls don't play with cars, weren't you afraid playing with the shark? What were the specs? I was afraid :) I always loved cars, and my interest doesn't stop after just knowing the name of the car :) I always tried to do things myself, and the Shark was just the perfect opportunity to experiment on cars. I never loved the small womanly cars, I've always loved big, sporty cars. The specs of the Shark are just what I needed for a daily car - 2.4TD auto, 85kW. Not much of the power was left after 27 years, so the first thing I did was adjust the mechanical fuel pump so I pass some cars in the streets. 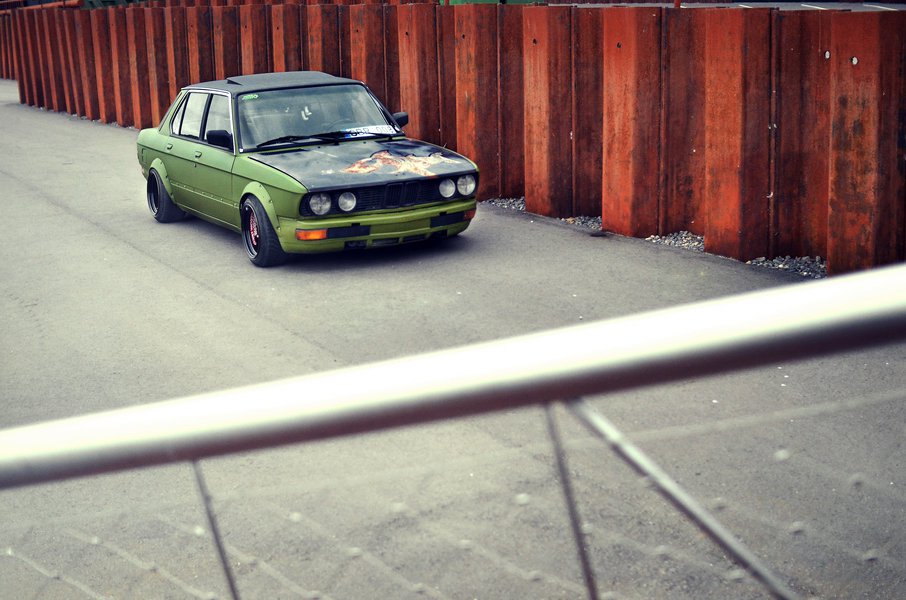 What was done to it? What have you done yourself? I've had it for a year and a half, and until this summer it had a "no shit" style. Colorful, almost all sanded, on widened steelies, 9J in the front and 10J in the back :) I started the project with the idea of spending as less money on it as I could, and of course doing it the best way I could. The only way of doing that was trying to do most of the things myself. The whole suspension was changed with new parts, 75 poly bushings everywhere, the shocks were rebuilt and made as stiff as possible. Under the hood, all possible things were changed. I did not touch the engine because it's like a clock - working without any problems. Of course, I could not do all of the jobs myself, because even if I knew how to fix it - I just did not have the strength to unbolt it. 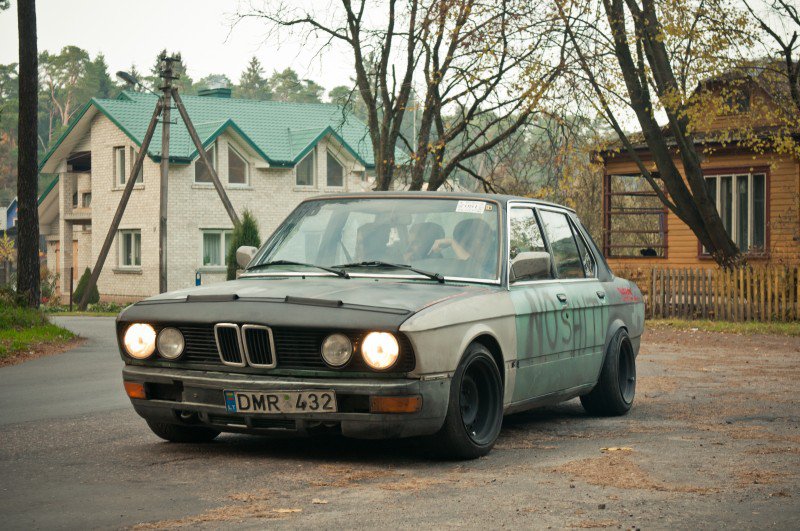 Last year I wanted to give it a cheap rattle can paint job, so it could finally be in one color because I started being annoyed of it being in all kinds of filthy colors. That's when I started learning how to prepare a car for paint. I finished it - but winter came and friends advised me to actually wait and give it a proper paint job. I decided to do it after winter, so I drove a little more with the different color theme. 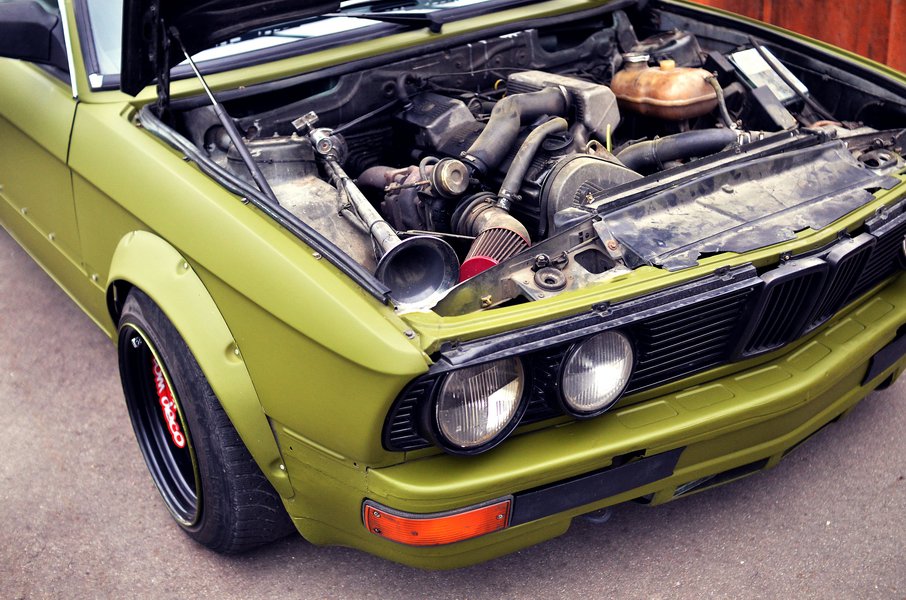 Little by little I collected all of the interior parts. I actually got a more rare interior - dark green one. I threw out the ugly E34 seats, and the interior became fully stock. The roof from the outside was covered in leather, this year I fixed it a little, changed the sunroof and made it that the roof is all leather with a fully working leather sunroof. Leather "Shadowline" :) 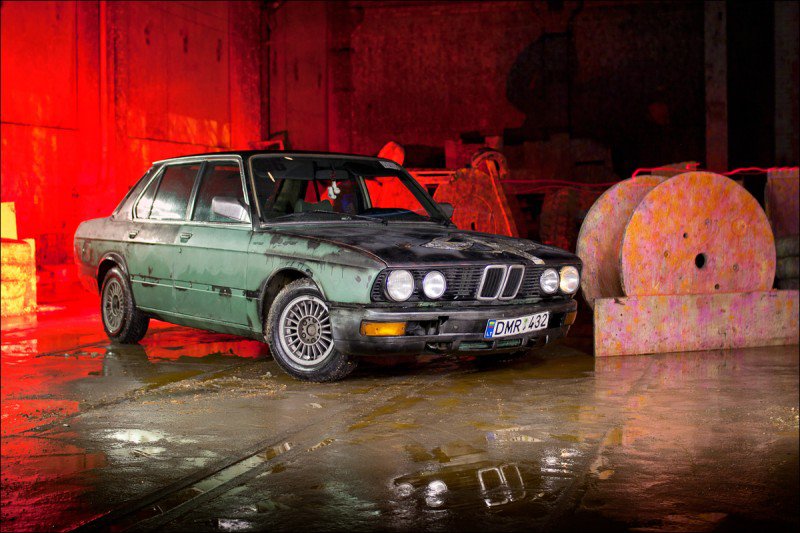 When I got the shark - I already knew I wanted wheels to be with a big lip, that's why it used widened steelies. This year we've changed the setup a little bit - now there's 10J with 195/50 in the front and 11J with 205/50 in the rear. Since the wheels in the rear were already poking too much - my friends gifted me some over fenders. The ass became really wide after I mounted them. And I loved it :) 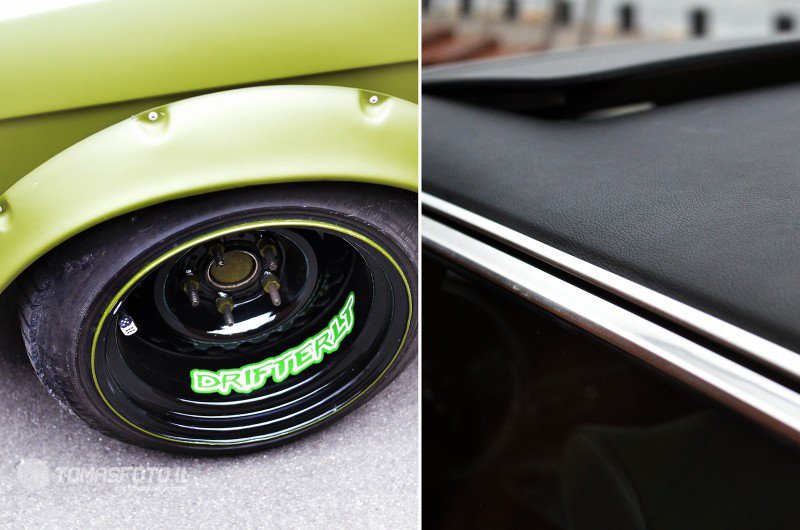 I learned a lot from my friends, a lot of them actually helped me with the shark. I tried to do as much as I could myself, but most of the time there was a guy looking at me, which tells me how to do it better, and sometimes even did it for me. Sucks, but what can I do if I don't have enough strength :) During one winter evening my best friend drew a shark on my hood, and we decided that we need to paint it, we did not have any paint and wanted to get over with it as fast as we could. Later that evening some friends came to my garage and told us to do a rat style shark. That's what we did :) 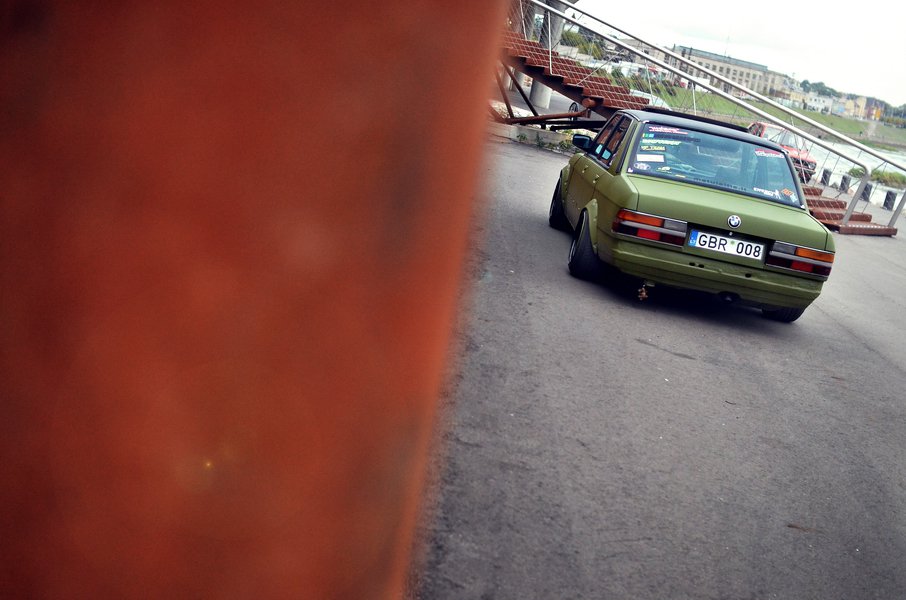 Body work, well I decided to give it to the guys who know what they are doing. During spring I finished preparing for paint doing everything myself. I gathered information from friends. Of course, friends helped me but I myself spent not one week in the garage. On a side note - now I know how to prepare a car for paint myself, but I would not like to do it again :) 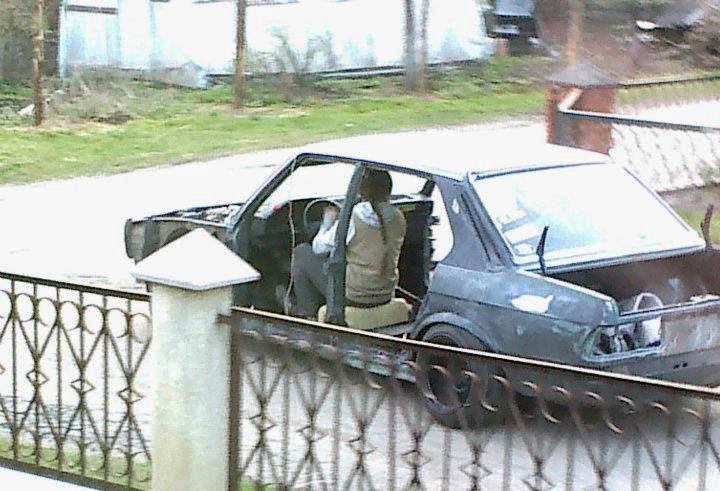 The journey to select a color was not short, I'd like to thank my friend for being really patient in selecting the right "military green" color :) Oh, for the fun sake - I installed an air horn on a truck. Actually, a lot was done, just that I don't remember it now :) 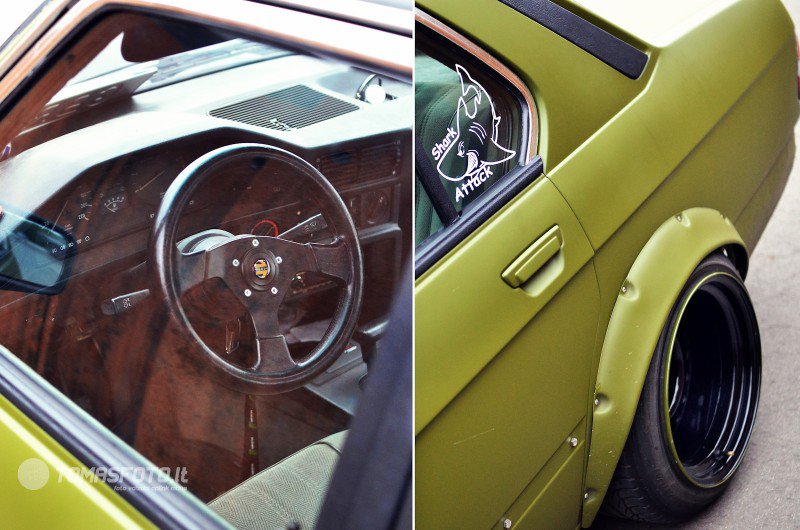 Where did you get so much love for cars? Did you fall in an oil puddle? I think I did fall in an oil puddle, just that my parent didn't tell me that :D Maybe my father wanted a son, that's why I'm so attracted to cars. Most of the time I can be found in a garage, and if there's some tool that is missing - it's me who is asked where to find it. I was surrounded by cars all my life, sports and regular ones that my father was selling. I want to be independent, that's why I try to do everything myself. I know my cars, that's my hobby and that's what I work on during my spare time, I'm actually getting frightened by that, because time is ticking, and I still don't get bored of cars. 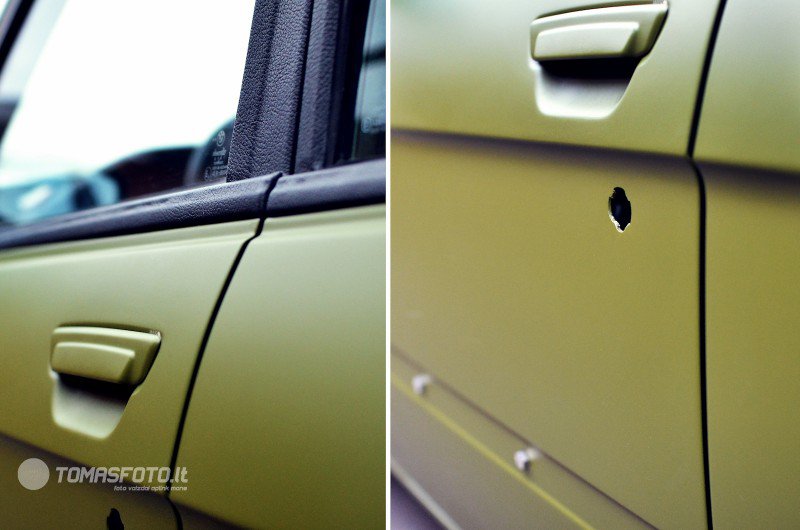 Were your friends jealous of your shark? No, friends were not jealous of it, because driving in it was a torture. Very stiff, very loud, all shaky :) But really fun :D Actually my friends were just as crazy as me. We're a trio which just by accident all had BMW's. Only one loved Old School BMW's - she had a very clean and looked over E30. Actually, it's quite a nice view when the three of us meet up - when all 3 nice looking cars meet up, an E28, E30, and an E36. 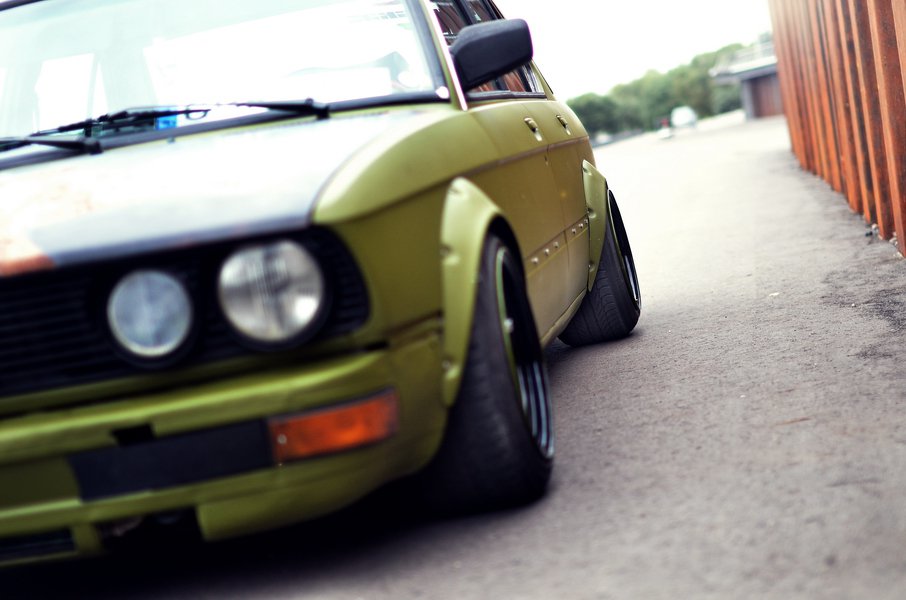 Just like any old car - it has its own rules. It doesn't like when men try doing something with it. Only a few were allowed to drive it, and only those who understand how it works and how to fix things. But of course, before allowing to drive - it always bites them. 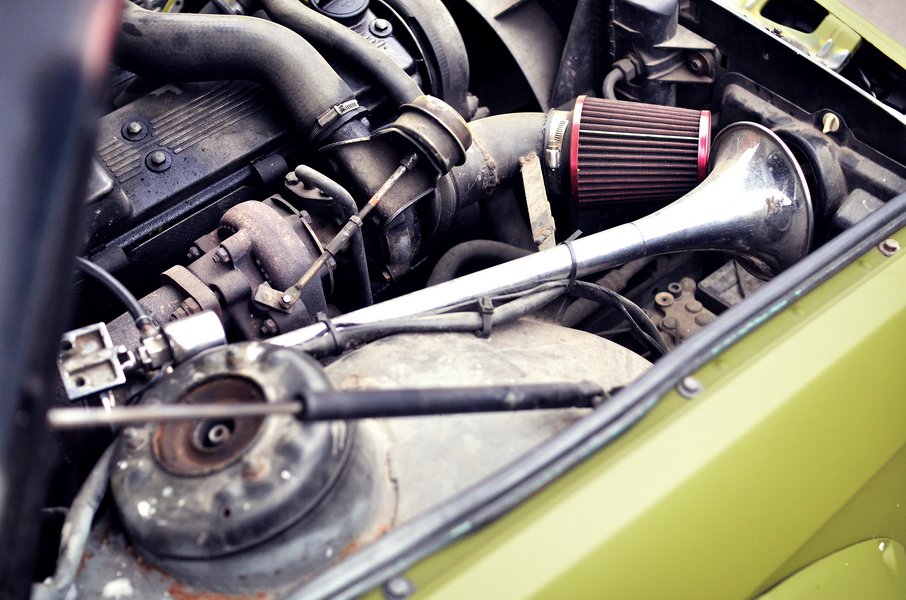 So since the car is sold now, what's next? Maybe a VW Passat? Passat? No way, thank you. The shark already left to the next owner. I can't keep it forever. I have a few dreams I'm trying to accomplish. But since I know myself - I know I can't just have a normal stock car, I know that after the shark the next car also has to be unique. I have to enjoy it while I'm young :) My next big dream is an STI Type-RA, of course, GC8 body, or an old Audi S2. I had a drive in one, don't know what was done to it, but it was a blast to drive. 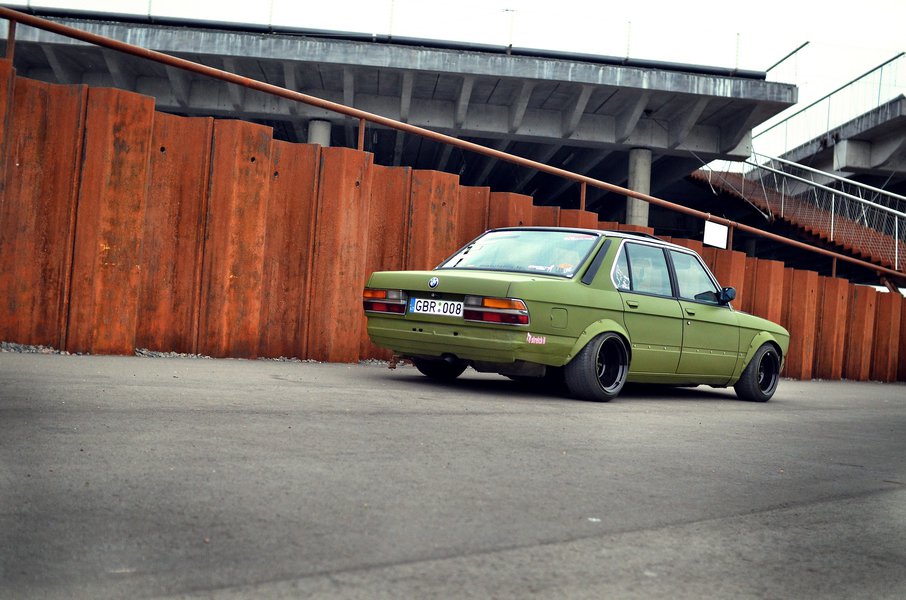 The last thing I'd like to say is that the only minus the shark had before it went military green was the attention it got. Everyone turned their heads to look, take a photo, give a thumbs up :) Of course, it's nice seeing such attention, people like what I do, but in the same way it really annoying :) And not only to me :)